Thanks to my relationship with Fujifilm I get to tryout new gear or a lens I have never used before. The gear is loaned to me with no strings attached and I’m asked for my honest feedback. This feedback, from myself and other Canadian X-photographers, has helped influence subsequent generations of cameras and lenses. Fujifilm listens to all of it’s clients and the result has been a continuing improvement in hardware and firmware. I don’t receive any compensation for my role.

I have also volunteered to help out at local events, such as the Walk in the Park events in Vancouver and Victoria. This provides another opportunity for Fujifilm to get feedback from photographers and to provide hands-on experience for potential new customers.

About 10 days ago, I received a copy of the XF27mm f/2.8 pancake lens to try out. I have read very little about this lens, but what I have read piqued my interest. In particular, I was interested to try it out on the street with my X-E2, to compare it to the 23mm f/2.0 lens on my X100S. The arrival of the lens coincided with the Fujifilm Walk in the Park event in Victoria.

On Saturday, a walk on the breakwater provided me a good opportunity to continue to shoot street photos into the light and to test the XF27mm lens in challenging conditions. Shooting this way, gives me very graphic images, but it is a test for the lens’ ability to handle flare and contrast. This lens did as well, if not better, than the f2.0 lens on the X100 cameras, my default camera for this sort of shooting. The combination of the X-E2 and XF27mm is very similar in feel and size to the X100s. Both are small and light options for walking the streets with a single focal length that will work for general street and travel photography. I love the X100s, but given the opportunity to try the XF27mm lens, I wanted to compare the results.

On Sunday, I took my X-E2 with the XF27mm lens to Beacon Hill Park to join Gord, Ramin and John (collectively, the Fuji Guys), for a photo walk with a number of local photographers. It seemed that most of the photographers were less flowers-in-the-park photogs and more street shooters. However, spending time in the park did provide a relaxed venue in which to make photographs and to ask questions about gear and techniques. I spent a lot of time talking to folks about ”back button focus.” This is something that happened in Vancouver as well. Which may lead to a future blog post…

The morning was bright and sunny, providing lots of contrast in our photos. As I had on the previous day, I shot BW-Y JPEGs with the X-E2/XF27mm combo. As much as I could, I shot at f/2.8. This was mostly a result of the types of shots I wanted to create, but I also found that I wasn’t very quick to change the aperture since I needed to use the scroll wheel on the back to do this. I’m not accustomed to doing this, since I don’t shoot with DSLRs much. No complaints about this though. It works. Just differently.

The XF27mm lens is really, really small and light. A very simple design, it did a very good job. I believe it is as good as the X100s lens. Of course, it does provide a narrower field of view, which makes a difference on the street. It is perhaps a little too long for my liking, but I think that I could adjust if this was my only option for street shooting. I really enjoyed having it on my X-E2. The combo felt very much like a film rangefinder and would seriously consider owning the lens, if I didn’t already have the X100S. Given the price, and if you already own one of the interchangeable X-bodies, the XF27mm is a very nice walk-around lens.

All photos captured with the X-E2 and XF27mm lens.
OOC JPEGS shot in monochrome with the Yellow filter.
Most of the breakwater photos were shot from the hip.
More photo walk photos> 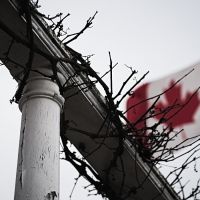