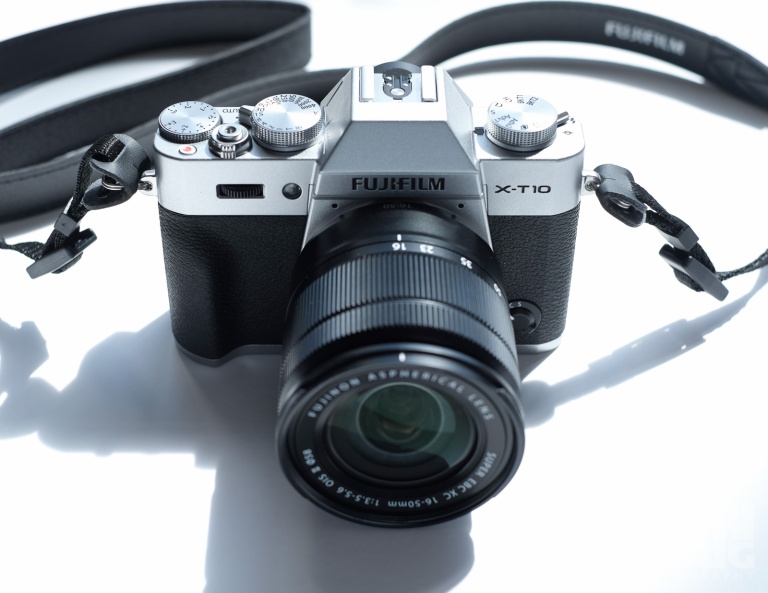 “I’m emailing you to see if you’d be interested in trying out a preproduction version of the camera.” That was part of a message I received from Fujifilm Canada a couple of weeks ago about a new camera for enthusiasts. Without much more information about the camera, I said ”yes.”

Expecting something like an X-A1 or a souped-up X30, I was surprised to receive a scaled-down X-T1. The X-T10 is about the size of an X100S/T, perhaps smaller, yet it accepts all of Fujifilm’s XF and XC lenses. It shares the same 16MP APS-C X-Trans II CMOS sensor as the X-T1, X-E2 and X100S/T, along with a number of other features from the X-T1. Plus, it has the new AF system that will be available in the upcoming firmware update for the X-T1.

The X-T10 loses some of the professional features of the X-T1 (full specs here), but retains many of the qualities that make X-cameras so great. Rather than go through a comparison of features, I will write about how I found the camera. In other words, did it meet my expectations.

You can’t ignore size when discussing this camera. It is small and light. With the kit XC16-50mm lens, this is one small camera. With the XF18mm or XF27mm lenses fronting it, the X-T10 is downright pocketable (jacket, not pant or shirt).

To use the camera more like it’s intended audience, I stuck to the kit XC16-50mm lens and my XF27mm and XF55-200mm lenses. I didn’t shoot with any of the pro-quality XF lenses and I used the full auto mode for some photos, but reverted to aperture priority for the rest of my shooting.

The arrangement of the dials and function buttons does make this a more consumer-orientated camera, but it is easy to access all the features I use regularly. This feels like a perfect camera for the enthusiast who would like to take more control of their shooting experience. They can shoot entirely in automatic mode or scene modes, but they will have all the manual controls easily accessible if they want to work in a more controlled manner.

The new AF system implemented in the X-T10, and available soon in the X-T1, is really great. I tested the new system with various moving subjects over the period that I had the camera. Since I normally use MF with focusing aids, I needed to switch my shooting method to test the new AF system. Fortunately, I happened upon a couple of events that allowed me to test it out. Some kids playing soccer in a park and viewing a sailboat race from a moving ferry gave me the opportunity to switch to CF with the AF set to zone focusing. From what I shot, I think this will be a great improvement in AF for moving objects.

Given the more pedestrian continuous shooting mode on the X-T10, compared to the X-T1, I can hardly wait to try the improved AF system on the X-T1.

Despite the small size of the X-T10, it handles well, even with the XF55-200 lens attached. I don’t think that I want to try any of the larger and heavier lenses on this body. This as a great travel camera. Along with the two XC zoom lenses and the XF27mm f/2.8 lens for low light, you have a tidy, compact travel kit.

A word about the XC16-55mm lens. It feels inexpensive and it is. I also miss the aperture ring, which it lacks. However, I can’t fault the quality of the images it produces, so it is a great companion to this small camera. It won’t stand up to the abuse that the XF lenses will take, but it will be a good place for the first-time buyer to start. The XF18-55mm lens will probably be a better investment, but it is difficult to convince first-time buyers of the importance of spending money on lenses. Eventually, many will learn that they will be putting a lot, a lot, more money into glass than into camera bodies. Their time will come.

The X-T10 is more than an X-T1 ”lite.” Given its advanced features and the great X-trans sensor, the X-T10 can easily serve as a backup or second body for many professionals. It is also excellent for street photography, with either the XF18mm or XF27mm lenses attached. With the electronic shutter switched on, the X-T10 is completely silent. On the street or in many travel situations, this discretion will come in very handy. As you can see from the eclectic selection of photos in this post, the X-T10 is a capable tool for many types of photography.

I really enjoyed shooting with the X-T10. Fujifilm has been successful in producing a great “enthusiast” camera and more. Given their recent record of product development, it’s no wonder, small or otherwise.

All images were captured with a preproduction X-T10, fronted with the XC16-50mm, XF27mm or the XF55-200mm lens. Since Lightroom can’t process the RAW files from the camera yet, these are also all OOC JPEGs with some post processing. Floral photos captured with the XF55-200mm lens and the 16mm extension tube. I did not use the pop-up flash, but was happy to see that the X-T10 also has a hot shoe and a threaded shutter button that accepts an analog cable release.

I am going to miss this camera when I send it back to Fujifilm.

One Reply to “Small Wonder”