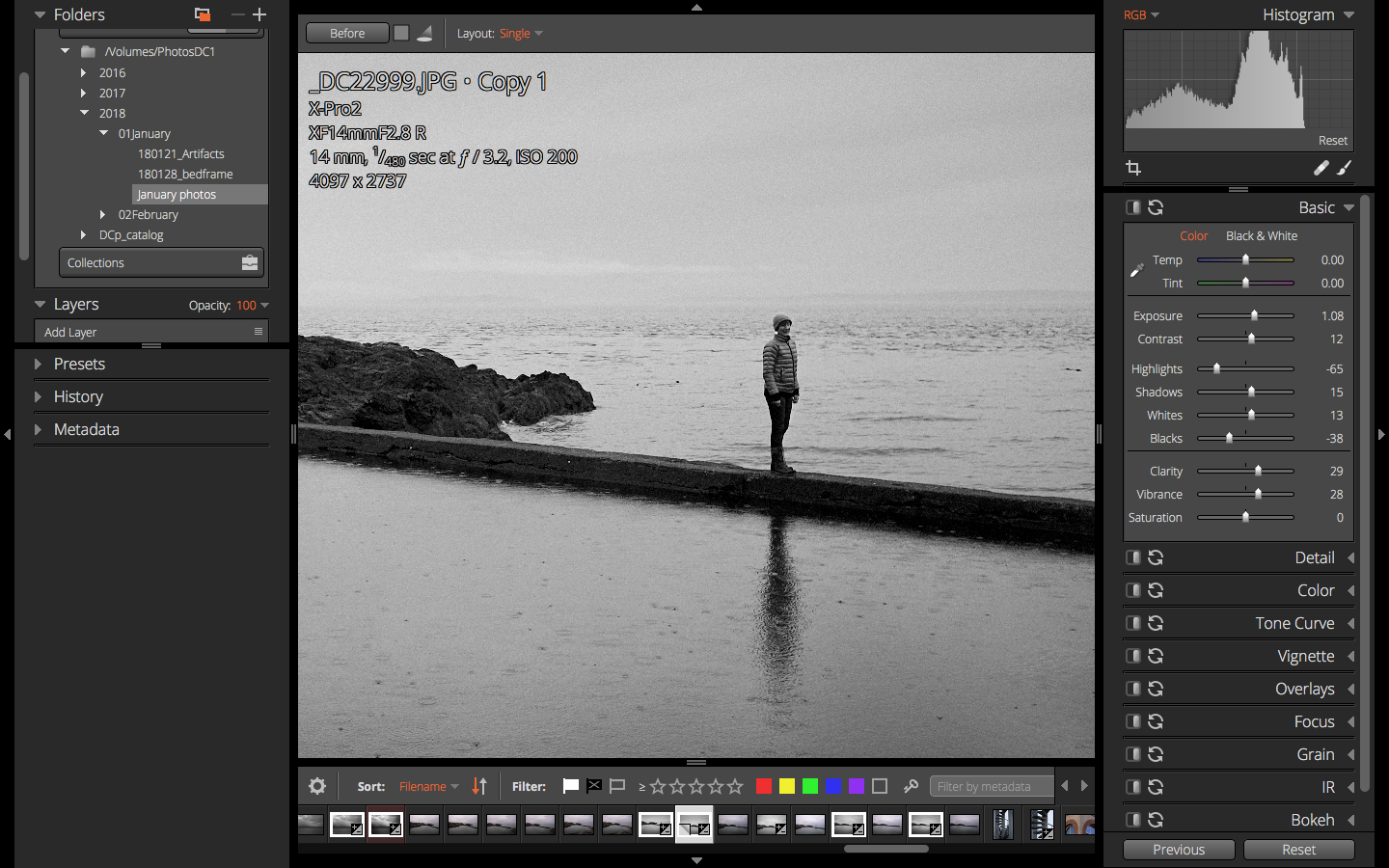 With Adobe’s announcement to abandon a stand-alone version of Lightroom, reverting to a subscription-only option, I have renewed my search for a replacement. One such option is Alien Skin Exposure X3, which the company has been heavily promoting.

Seeing an opportunity, Alien Skin software has updated their LR and Photoshop plugin, Exposure to be a stand-alone photo editing application that has the promise of being a Lightroom replacement.

While a number of photographers have long since jumped to Capture One, I have been underwhelmed with C1. I attempted three times to make the switch, but have not been convinced that the software does a better job of working with the the X-trans RAW files and I certainly didn’t like working in the application. Finally, C1 does not support the RAW files from the GFX, which makes the software a non starter. So, I have stuck with LR as we have approached the subscription-only cliff. Rather than drive off of that cliff, I have continued to try out alternatives.

With the release of Exposure X3, there is the promise of an application that I can see replacing Lightroom. So, I have paid my money (rather than get paid by Alien Skin to promote the application – you know who you are) and will be attempting to use it exclusively for my personal work. My government photography will remain Lightroom based. Work pays the subscription fees and there are still a number of features that I rely upon in LR for work, which are missing in the current version of X3.

Exposure X3 is a very capable photo editing application and I would recommend it for many photographers right now. This latest version of the software is a stand-alone, non-destructive RAW photo editor which DOES NOT use a catalog database to store the information about the photos in your “library” or the edits you have made to them. Instead, X3 stores any metadata and edit data in the same folder where your photos are located. If the application can see a folder, then it is available for you to work with. This might prove to be easier for some folks. In the many years that I taught LR workshops, I found that working in the Library module of LR was definitely the most confusing aspect of the application for many people.

Since keywords are one of the few metadata items that X3 will write to the photo data files, it seems like the application of keywords will be critical to keeping track of photos. Having relied upon the LR catalog for so many years, I expect that this might be a test of my ability to keep my photos well organized. The up side to not having a catalog is that I can switch my external photo hard disk between my iMac and my laptop and Exposure will recognize all of the edits of any photos made in the application without the need to worry about where the catalog lives.

Exposure does have a number of excellent film simulation presets that can be a good starting point for your photo edits. Anyone who has used the app as a plugin in Photoshop or Lightroom will really enjoy being able to apply these presets non-destructively to RAW files in a stand-alone application.

As with many of the differences between working in LR and X3, a little experience will provide me with a new way of doing things, not necessarily better or worse.

What it is not

If you are coming from Lightroom or Capture One, you will find a number of features missing. I will only talk about the aspects of X3 in comparison to LR, since that is where I have greater experience. As I wrote above, Exposure X3 is a very capable photo editing tool right now. X3 does many (most?) of the things that LR can do. Alien Skin would like you to think that it can do some (all?) things as well or better than LR. For right now, I will just say that X3 does things differently.

So, what doesn’t X3 do right now that I would like to see? Here is a list of items I have found lacking or missing entirely:

Import dialog incomplete: Currently, you can not see a preview of photos to import. My standard for importing from an SD card is Photo Mechanic. Until Exposure X3 implements something like this, I will continue to use PM to import photos to the hard drive before pointing X3 at that folder.

Camera specific settings missing: While there is camera/lens correction available for a limited set of cameras and lenses in X3, you don’t have access to the camera calibration presets available in LR. This is particularly painful for a Fujifilm X-trans user, where you can apply all of the Fuji film simulations to your RAW files in LR. This is the starting point for me in all of my work.

Performance isn’t as good as LR: In particular, I notice poor performance when applying local adjustments on an image with the brush tool. This process is implemented differently in Exposure, where you use layers and masks, ala Photoshop, than it is in LR. You can get to the same place in both applications, but X3 bogs down when brushing on the mask layer, frequently pausing to render. Change views and it has to render again. And again. And again. Using the same computer and working on the same file, LR blitzes through this type of local adjustment. This one deficit will keep me from using X3 for large jobs that require local adjustments.

Printing not available: That’s right. No printing from X3. You might say ”so what,” but I transitioned from Photoshop to Lightroom in part because of the great printing results I achieved with LR. Lightroom is really great for printing, from print preview in the Develop module to colour management in the Print module. I print a lot and won’t do without a good printing solution.

I sent this list to Alien Skin support and received the following response, ”Thank you for your feedback. Many of these are existing requests or in progress already for future updates. We’ve recorded your comments in the appropriate project logs. Please let us know if you have any further questions or feedback.”

I will leave it to Alien Skin to improve Exposure X3 enough to be seriously considered as a Lightroom replacement. I have put my money on them to succeed.

4 Replies to “Time for a change”