It had to happen. With the upgrade of one of my work cameras to the X-H1, I had to look for an alternative to Lightroom 6 to process a recent freelance job. My government work photography still relies upon Lightroom Classic CC to process images, but I have been looking for an alternative to the Adobe rental model for my personal projects and jobs.

I have tested Alien Skin Exposure X3 with good results, but until now, I haven’t tried to process an entire job. A few weeks ago I got the chance to put Exposure X3 through it’s paces, processing a batch of a few hundred photos. In short, Exposure X3 got the job done admirably. Aside from having to learn some new keyboard shortcuts, I would say that the job was completed in about the same time it would have taken me in Lightroom.

This job was photographing a long-service awards ceremony and reception. It’s a mixed bag of candid photos in a variety of lighting conditions, plus a large number of stage presentation shots under fixed lighting conditions. (By the way, I used the new X-H1 with the XF16-55mm f/2.8 lens for the entire event. The combination worked great; the improved auto-focus and IBIS of the X-H1 really changes how I use the 16-55.)

Exposure X3 handled all the tasks I needed to complete really well. Imported RAW files are automatically adjusted so that only minor tweaks were needed to complete the exposure adjustments. I was also able to apply Fujifilm film presets to the photos, something I always do with images in LR. A nice addition to the latest version of E3. Another great update is the colour temperature adjustment is now in Kelvin. And, I was able to select all of the stage shots and adjust the white balance to them simultaneously. Second big plus.

One adjustment that took me longer in E3 than in LR was fixing the angle of the stage shots. I need to use the angle tool to straighten each image. In LR, there is a keyboard shortcut to access the tool, once you are using the crop tool. Not so in Exposure X3. It’s a real pain to have to click on the angle tool icon in the crop panel for over one hundred photos, instead of just pressing the command key. This would be a nice update Alien Skin developers…

Renaming files and outputting to deliver to the client were simple chores in E3. Job done! 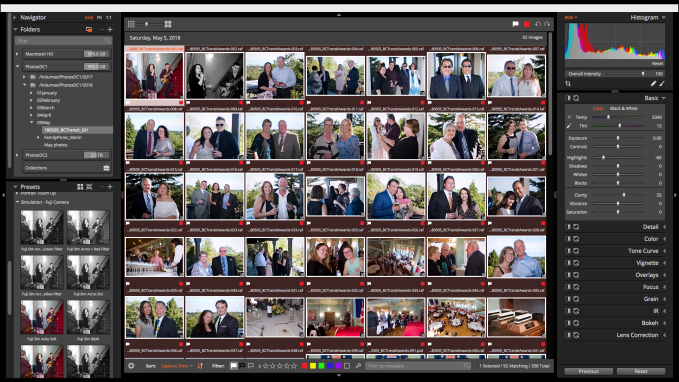 My conclusion from this job is that Exposure X3 is a good option for processing large numbers of files. However, there are still a few pieces missing before I feel confident in giving up LR for my personal work and relying entirely upon E3.

I want a metadata preset that I can apply to photos, once I am working in the folder view, not just when photos are imported by E3 (I don’t use E3 or LR to import photos. Photo Mechanic remains the best tool for this job). Also, I regularly use the Upright tool in LR and would like to see a similar function in Exposure. Finally, although there is now a print function in E3, it has a long way to go before it will replace LR for printing. Lightroom has a thorough colour/print management process available and I rely upon it for making all of my prints. I won’t give that up, so I hope the next update to E3 improves that aspect of software.

Job done? Not quite as far as Exposure X3 goes. Looking forward to the next update.